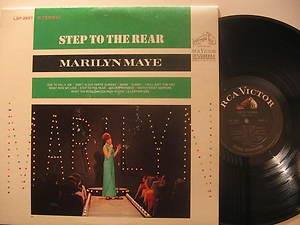 On The Neon Beat this week, Jukebox 1: The Marvelous Marilyn Maye opens this week’s offerings with her rousing signature hit song, “Step to the Rear.” Dean Martin takes the stage next with an Italian favorite, “Volare.” We’ll track some great period male groups such as The Hilltoppers (“From the Vine came the Grape”), The Ames Brothers with a great Tommy Dorsey standard, and The Four Preps (“Down by the Station”) We’ll revisit a charming period “white picket fence” song performed by Oklahoman Patti Page. Enjoy a rousing instrumental called “The Manhattan Spiritual” by Reg Owen followed with some George and Ira Gershwin music sung by Sarah Vaughan. We remember some Rodgers and Hammerstein music from “The King and I” sung by Perry Como. We’ll spin the pretty Kitty Kallen version of “Chapel in the Moonlight.” Listen to Lou Rawls with “You’ll Never Find Another Love Like Mine” followed up with Vikki Carr’s 1967 hit song, “It Must Be Him.” We’ll throw in a Charlie Brown standard performed brilliantly on the keyboard by jazz artist David Benoit. Hit records by Rick Nelson, Doris Day and Nancy Sinatra with Lee Hazelwood.
Listen today at: http://www.radiogeorge.com/neonbeat/

On The Neon Beat this week, Jukebox 2: Les Brown directing his Band of Reknown with Doris Day slam into this hour with the song, “S’ Wonderful.” Then will enjoy some film music with the Four Aces singing, “Three Coins in the Fountain.” Frank Sinatra performs some great Cole Porter singing, “I Get a Kick Out of You” followed with some fine music carried off by the first lady of song: Ella Fitzgerald sings “I’ll Take Manhattan.” Billie Holiday takes the stage for “Pennies from Heaven” followed up with a jazzy rendition of “A Nightingale in Berkeley Square” by Bobby Darin and the Nat King Cole Trio with “Straighten Up and Fly Right.” We’ll team up the great Tony Bennett with jazz diva Diana Krall for the song, “the Best is Yet to Come.” Dean Martin croons the lovely song, “Innamorata.” Tap your toes to Dionne Warwick’s “Do You Know the Way to San Jose.” Then we’ll do a “Sophisticated Swing” with Jimmy Dorsey’s Orchestra. Lishttp://theneonbeat.blogspot.com/
ten to a signature performance with Lena Horne singing “Stormy Weather” followed up with Louis Armstrong doing “Dream a Little Dream of Me.” Hear Glen Campbell with the theme song from the film, “True Grit.” Solid gold hits by Elvis, Patti Page, and The McGuire Sisters.  Leave comments view the lists and links:

On The Neon Beat this week, Jukebox 3: Patti Page launches this hour with a song from the 1954 play, “The Pajama Game.” A couple of chillers next with Engelbert Humperdinck’s “Winter World of Love” followed with The Lettermen’s version of “Our Winter Love.” Listen to the lovely Julie London with her amorous rendition of “The Good Life.” Enjoy some music of the cinema with Vikki Carr singing one from the film “Little Me,” Vic Damone with a standard from “West Side Story” and Dinah Shore with a song sung by Bob Hope in “The Paleface.” Dean Martin proposes a toast as a lonely country boy from Nashville singing “Little Ol’ Wine Drinker Me.” Hear Sarah Vaughan sing a great period hit used by Rosemary Clooney to open her TV show. Listen to Nat King Cole with the song “Too Young.” Enjoy a jazzy version of the song “Mississippi” by Oklahoman, Kay Starr and an instrumental favorite by The Village Stompers. We’ll spin hit records by Johnny Mathis (I’m Coming Home), Ray Conniff and the Chorus (Invisible Tears), and one of Loren Green’s tales of the Ponderosa, “Ringo.” Listen this week at: http://www.radiogeorge.com/neonbeat/